A large-scale prototype soil-foundation-structure system named “EuroProteas”, a symbolic name from the derivatives “Euro” and “Proteas” – for the first large-scale model structure in Europe dedicated to study soil- foundation- structure interaction (SFSI) phenomena – has been built in Euroseistest.

In theory, the two most important parameters affecting SFSI are the relative structure-to-soil stiffness ratio and the structural slenderness. The first one, given soil characteristics beneath the foundation, is adjusted by geometry and dynamic characteristics of the superstructure (notably mass and stiffness). The second one (slenderness) is adjusted by structural geometry. Consequently, in order to promote kinematic and inertial interaction effects under dynamic loading, a judicious choice of geometric and material characteristics had to be made for the structure.

The concept that led the design of EuroProteas in Euroseistest site was to have a reconfigurable simplified structure, able to demonstrate clearly the salient effects of SFSI on the superstructure and soil response. More specifically, the following requirements were envisaged during the design of the prototype:

The structural design conformed to the provisions of modern codes and regulations:

Based on the above requirements, the prototype was designed to comprise of one RC foundation slab, on top of which are clamped four steel columns supporting the superstructure mass of one (or two, depending on the configuration) RC slabs, identical to the foundation slab. The four steel columns are connected with X-braces in both directions, forming a totally symmetric structure (Fig. 1). The prototype structure is able to accommodate pull-out tests from all four sides, by special hinges adjusted in the bottom roof slab. Additionally, the foundation slab and top roof slab are designed such as a dynamic vibrator system can be fixed for forced-vibration tests. 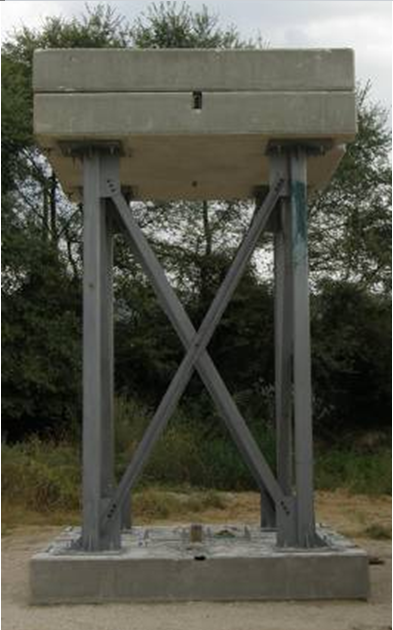